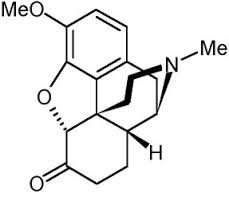 Hydrocodone is a semi-synthetic opioid derived from codeine. Hydrocodone is used orallyRoute of administration in which the subject swallows a substance. as a narcotic analgesic and antitussive (cough medicine), often in combination with paracetamol (acetaminophen) or ibuprofen. Hydrocodone is prescribed predominantly within the United States; elsewhere it is rare. The International Narcotics Control Board reported 99% of the worldwide supply in 2007 was consumed in the United States.

The relative milligramme strength of hydrocodone to codeine is given as 6 fold, that is 5 mg has the effect of 30 mg of codeine; by way of the Roman numeral VI this is said to given rise to the trade name Vicodin.

Hydrocodone was first synthesized in Germany in 1920 by Carl Mannich and Helene Löwenheim. Hydrocodone is derived from codeine. As a semi-synthetic opioid, it is most often used orallyRoute of administration in which the subject swallows a substance. as a narcotic analgesic and antitussive. Used mostly in combination with Acetaminophen (Vicodin) or Ibuprofen. If you have a drug with acetaminophen in it, we strongly recommend you cold water (CWE) extract the acetaminophen away. CWE methods can be found Here

Hydrocodone is a prodrug, insufflated and intravenous dosing is dangerous.

The following refers to hydrocodone in the form of hydrocodone mixture with Acetaminophen/Ibuprofen.

Half-Life depends on a lot of factors such as weight, BMI, and metabolism, but average plasma half-life is 3.8 hours.

Any dose of Hydrocodone may be fatal. Do not mix with other drugs or alcohol.

Excessive alcohol/grapefruit juice drinking while taking drug that contains APAP, can cause liver damage, other severe medical conditions, and even death.

Please consider CWE if your hydrocodone contains APAP, as APAP is harmful to your liver and doctors recommend no more than 4g.

The following products may react negatively with hydrocodone and may cause overdose if mixed together.

Under the Controlled Substances Act (CSA) hydrocodone is listed as both a Schedule II and Schedule III substance depending on the formulation.

Hydrocodone was until recently the active antitussive in more than 200 formulations of cough syrups and tablets sold in the United States. In late 2006, the FDA began forcing the recall of many of these formulations due to reports of deaths in infants and children under the age of six. The legal status of drug formulations originally sold between 1938 and 1962—before FDA approval was required—was ambiguous. As a result of FDA enforcement action, by August 2010, 88% of the hydrocodone-containing medications had been removed from the market.

At the present time[when?], doctors, pharmacists, and codeine-sensitive or allergic patients or sensitive to the amounts of histamine released by its metabolites must choose among rapidly dwindling supplies of the Hycodan-Codiclear-Hydromet type syrups, Tussionex—an extended-release suspension similar to the European products Codipertussin (codeine hydrochloride), Paracodin suspension (dihydrocodeine hydroiodide), Tusscodin (nicocodeine hydrochloride) and others—and a handful of weak dihydrocodeine syrups. The low sales volume and Schedule II status of Dilaudid cough syrup predictably leads to under-utilisation of the drug. There are several conflicting views concerning the US availability of cough preparations containing ethylmorphine (also called dionine or codethyline)—Feco Syrup and its equivalents were first marketed circa 1895 and still in common use in the 1940s and 1950s, and the main ingredient is treated like codeine under the Controlled Substances Act of 1970.[citation needed] In the U.S., hydrocodone is always found in combination with other drugs such as paracetamol (also called acetaminophen), aspirin, an NSAID, ibuprofen, an antihistamine, an expectorant, or homatropine methylbromide due to compounding regulations. These combinations are considered C-III substances, prescriptions for which are generally valid for 6 months, including refills. The purpose of the non-controlled drugs in combination is often twofold:

The cough preparation Codiclear DH is the purest US hydrocodone item, containing guaifenesin and small amounts of ethanol as active ingredients.[citation needed] As of July 2010, the FDA was considering banning some hydrocodone and oxycodone fixed-combination proprietary prescription drugs—based on the paracetamol content and the widespread occurrence of liver problems. FDA action on this suggestion would ostensibly also affect codeine and dihydrocodeine products such as the Tylenol With Codeine and Panlor series of drugs.[citation needed] In 2010, it was the most prescribed drug in the USA, with 131.2 million prescriptions of hydrocodone (combined with paracetamol) being written