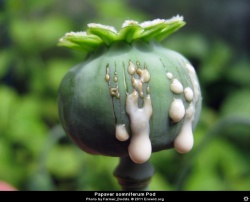 Opioids are among the world's oldest known drugs; the therapeutic use of the opium poppy predates recorded history. Excavations of the remains of neolithic settlements in Switzerland (the Cortaillod culture, 3200-2600 B.C.), have shown that Papaver was already being cultivated then; perhaps for the food value in the seeds (45% oil), which we know as poppy seeds. The slightly narcotic property of this plant was undoubtedly already known then.