Difference between revisions of "Codeine" 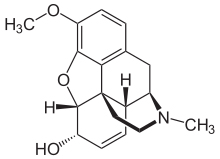 In 1832, codeine was isolated from opium, which has a codeine content of 2 to 30/0 (see Papaver somniferum). Codeine is also biosynthesized in the roots of Papaver somniferum 1. cv. Marianne (Tam et al. 1980). It is possible that trace amounts of codeine can also be found in other Papaver species (Papaver bracteatum, Papaver decaisnei; cf. Papaver spp.) (Theuns et al. 1986). Codeine is also an endogenous neurotransmitter in humans (cf. morphine). A dosage of 20 to 50 mg produces "general mental stimulation, warmth in the head, and an increase in the pulse rate, as also appear after the consumption of alcohol" (Rompp 1950*). Codeine does not appear to be metabolized in the body and is excreted unchanged. Because codeine suppresses the urge to cough, its most important pharmaceutical use is in cough syrups.

The dosage when codeine is used as a cough suppressant is 50 mg three times a day. A dosage of 100 to 200 mg results in sleep and sedation. Higher dosages elicit effects comparable to those of morphine. The medical literature contains repeated mentions of "codeine addiction." Codeine "addicts" are said to ingest up to 2 g of codeine daily (Rompp 1950, 115*). Today, codeine is gaining increasing medicinal importance as a substitution therapy for heroin addicts (Gerlach and Schneider 1994). The pharmaceutical industry synthesizes codeine primarily from thebaine, the main active constituent in Papaver bracteatum Lindl. (cf. Papaver spp.) (Morton 1977, 125*; Theuns et al. 1986). Codeine has acquired a certain significance in the music scene (jazz, rock, psychedelia), primarily as a substitute for heroin or morphine. Buffy Saint-Marie sang about the anguish of her codeine dependence in the song "Cod'ine" (LP It's My Way! Vanguard Records 1964). Quicksilver Messenger Service later covered the song and made it famous. In the 1990s, the wave band Codeine had several albums out through Sub Pop. Cough syrups496 with a high codeine content were often consumed as inebriants at concerts, festivals, et cetera (usually in combination with alcohol and cannabis) (Bangs 1978, 158).

Since the 1990's codeine has gained popularity in the rap music scene where a mixture containing codeine promethazine cough syrup is consumed under the name purple drank and several artists have released songs about it. (Hart, Agnich, Stogner, Miller 2013)