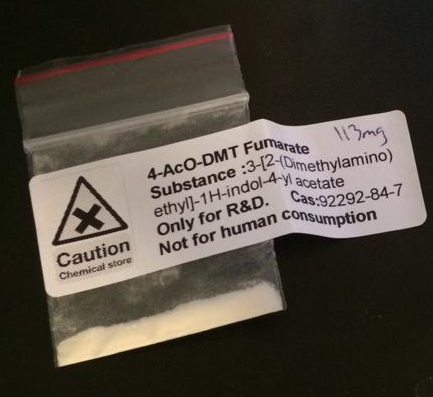 O-Acetylpsilocin (also known as Psilacetin, 4-Acetoxy-DMT, or 4-AcO-DMT) is a synthetically produced psychoactive drug with a limited history of use. Its effects and duration are similar to those of psilocybin/psilocin although it is sometimes described as "warmer" or "more euphoric" than psilocybin-containing mushrooms. It is probably metabolically converted into psilocin in the body, but there are also reasons to believe that 4-acetoxy-DMT might itself be active in the brain, producing effects that are distinct from psilocin.

Ideal dosage varies widely between individuals. Some people get very heavy mental effects and others find the mental effects light. It's best to start low and see how you are impacted. While extremely strong doses of 4-aco-dmt seem to be well tolerated physically, it is ill-advised to jump into extremely large doses.

Differences between O-Acetylpsilocin and Psilocybin Mushrooms

Although very similar chemically and in effect, there are some slight differences between O-Acetylpsilocin (4-aco-dmt) and common strains of psilocybin mushrooms. Firstly, the powdered nature of 4-aco-dmt means that it can be processed faster in the body, leading to a faster onset and shorter duration. This can also make the effects of 4-aco-dmt seem more intense when first coming up.

Ingesting mushrooms often creates feelings of nausea for the user due to the flesh of the fungi containing chitin, and for this reason it seems that 4-aco-dmt has far fewer reports of feelings of nausea or vomiting. Insufflation is an option with 4-aco-dmt, leading to stronger effects for the provided dosage and an even faster onset and shorter duration. It is not possible or advisable to attempt to insufflate magic mushrooms.

Most psilocybin containing mushrooms will often contain other active ingredients, meaning that depending on the strain the effects of mushrooms could feel different to those of 4-aco-dmt. The most common active ingredients in magic mushrooms are psilocybin, psilocin, baeocystin and norbeaocystin, whereas 4-aco-dmt metabolises into pure psilocin.