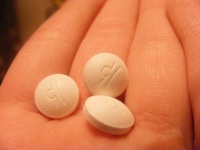 Tramadol is a sedative and a painkiller, which is also an SNRISerotonin–Norepinephrine Reuptake Inhibitor. It is used as a prescription drug in many countries to treat moderate pain (often combined with paracetamol), and also sees recreational use for its euphoric opioid effects. Due to its complex and atypical nature, it has also been investigated for use in the treatment of many conditions, including PTSD, opioid withdrawal, OCD and the management of diabetic side-effects.

Tramadol was first discovered in 1962 in Germany, and was later released under the brand name Tramal in 1977 - lauded due to its additional SNRISerotonin–Norepinephrine Reuptake Inhibitor action. It later became a popular choice as a prescription drug for pain treatment around the world. Despite its branding and institutional view as a drug with little potential for abuse, it has increasing amounts of recreational use since release.

In 2013, it was discovered that tramadol is produced naturally in high concentrations in the root of the African pin cushion tree.

Doses are given on a tolerance scale, since it accrues quickly; users should note that the lowering of the seizure threshold occurs regardless of tolerance.

Long onset, slowly building to a peak by hour 4 with maximum blood concentration achieved near hour 4.5.

Some users may experience

Reuptake inhibitor of serotoninA monoamine neurotransmitter, biochemically derived from tryptophan, that is primarily found in the gastrointestinal (GI) tract, platelets, and central nervous system (CNS) of humans and animals. It is a well-known contributor to feelings of well-being. and of norepinephrine

We cannot stress this enough; if you have a history of seizures, we strongly urge you to stay away from tramadol as a recreational substance. By itself, it can decrease the seizure threshold. When combined with SSRIs, tricyclic antidepressants, or in patients with epilepsy, the seizure threshold is further decreased. Seizures have been reported in humans receiving excessive single oral doses (700 mg) or large intravenous doses (300 mg). However, there have been several rare cases of people having grand-mal seizures at doses as low as 100–400 mg orallyRoute of administration in which the subject swallows a substance..