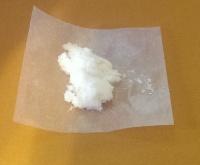 Mephedrone (4-Methylmethcathinone, 4-MMC, and also known by slang terms such as 'meow' and 'M-CAT') is a synthetic stimulant with empathogenic effects. A research chemical first developed as an analogue of MDMA in 1929, it eventually became popular among recreational drug users between 2007 and 2009 as it became available for purchase online. As a result, it was used increasingly in Europe, Australia, and New Zealand, associated with several deaths, and as a result was controlled in some countries.

Because of the similarity in names, it is sometimes confused with Methedrone (4-Methoxymethcathinone, βk-PMMC) or Methylone (βk-MDMA).

Duration may lengthen with higher doses.

Generally described as being more intense of a stimulant than MDMA, providing greater euphoria, but with somewhat less of an empathogenic feel and a shorter length to the 'rush.'

It is often reported as very 'fiendish,' with the tendency to cause users to redose repeatedly throughout the experience.

Likelihood of negative side effects increases with higher doses

Mephedrone is a releasing agent and reuptake inhibitor of dopamineA neurotransmitter associated with movement, attention, learning, and the brain’s pleasure and reward system., serotoninA monoamine neurotransmitter, biochemically derived from tryptophan, that is primarily found in the gastrointestinal (GI) tract, platelets, and central nervous system (CNS) of humans and animals. It is a well-known contributor to feelings of well-being. and norepinephrine.

For a breakdown of the legal status of Mephedrone click here.