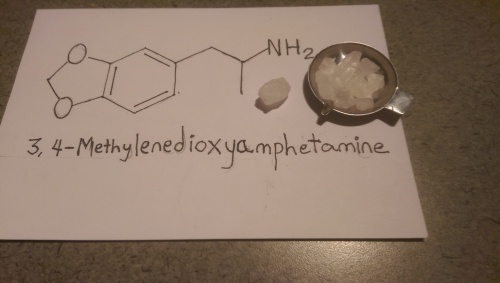 MDA (Methylenedioxyamphetamine) is an popular drug of the phenethylaminePhenethylamine (PEA) is a natural monoamine alkaloid, trace amine, and psychoactive drug with stimulant effects. In the mammalian central nervous system, phenethylamine is believed to function as a neuromodulator or neurotransmitter. and amphetamine class knownthat is mainly used as a recreational drug, an entheogen, and a tool in use to supplement various types of practices for transcendence, including in meditation, psychonautics, and as an agent in psychedelic psychotherapy.

It most frequently comes in tablet form, although it is also found in capsules or as powder. MDA is also known as "sass" or "sassafras"and several other names.

MDA was first synthesized by G. Mannish and W. Jacobson in 1910.

It was first ingested in July 1930 by Gordon Alles who then licensed the drug to Smith Kline and French. MDA was first used in animal tests in 1939, and human trials began in 1941 in the exploration of possible therapies for Parkinson's disease. From 1949 to 1957, more than 500 human subjects were given MDA in an investigation of its potential use as an antidepressant and/or anorectic by Smith, Kline & French.

The United States Army also experimented with the drug, code named EA-1298, while working to develop a truth drug or incapacitating agent. One human subject died in January 1953 after being intravenously injected with 450 mg of the drug.

MDA was patented as a cough suppressant by H. D. Brown in 1958, as an ataractic by Smith, Kline & French in 1960, and as an anorectic under the trade name “Amphedoxamine” in 1961. Several researchers, including Claudio Naranjo and Richard Yensen, have explored MDA in the field of psychotherapy.

MDA began to appear on the recreational drug scene around 1963 to 1964. It was then inexpensive and readily available as a research chemical from several scientific supply houses. Although now illegal, MDA continues to be bought, sold, and used as a recreational 'love drug', due to its enhancement of empathy.

Many users report feeling extremely drained the day after MD(M)A use. This 'day after' effect means for many MD(M)A users that they need to plan 2 days for the experience: one for the peak experience and one recovery day, with very little planned. Many users also experience some level of post-MD(M)A depression, often starting on the second day after the experience and lasting for up to 5 days. A small percentage of users report depressive symptoms for weeks afterwards. Alternately, some users report feeling better than normal for a week or so after taking MD(M)A . The negative after-effects of taking MDMA appear to be worse with higher frequencies of use, higher dosages, and perhaps total lifetime usage.

MDA rapidly builds tolerance, depletes serotoninA monoamine neurotransmitter, biochemically derived from tryptophan, that is primarily found in the gastrointestinal (GI) tract, platelets, and central nervous system (CNS) of humans and animals. It is a well-known contributor to feelings of well-being. and compounds neurotoxicity issues. Look for other drugs and avoid using MDA more than once every few months.

MDA can cause Serotonin Syndrome when combined with MAOIs. Refer to Drug combinations for more information.

SSRIs and SNRIs block most effects of MD(M)A.

Take a look at MDMA Chemistry and Pharmacology. MDA is around five times as neurotoxic as MDMA and should not be used frequently.

MDA is legally controlled in most of the world under the UN Convention on Psychotropic Substances and other international agreements, although exceptions exist for research and limited medical use. In general, the unlicensed use, sale or manufacture of MDA are all criminal offences.