Difference between revisions of "Kava" 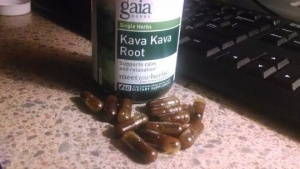 Kava (Piper methysticum) is a tropical evergreen shrub with large heart-shaped leaves and woody stems. Its thick roots are mashed or ground and made into a cold and bitter-tasting beverage used similarly to alcohol. It has a long history of ritual and recreational use in Pacific Polynesia and is now a common herbal product, used widely by those in certain societies as part of a 'Kava Culture.'

Kava is used for medicinal, religious, political, cultural and social purposes throughout the Pacific, and have been for many years. Though the exact geographical origin and the date of the initial discovery of Kava as a psychoactive plant are unknown, there are several legends as to its discovery in the various ancient Pacific communities.

Kava cultures are the religious and cultural traditions of western Oceania which consume kava. There are similarities in the use of kava between the different cultures, but each one also has its own traditions.

These cultures have a great respect for the plant and place a high importance on it. In Fiji, for example, a formal yaqona (kava) ceremony will often accompany important social, political, religious, etc. functions, usually involving a ritual presentation of the bundled roots as a sevusevu (gift), and drinking of the yaqona itself.

Western interest in the plant started as early as 1778, upon Captain Cook's voyages to the Pacific islands - though it was at the time seen as inferior to alcohol. However, through medium of the Internet, the plant has in recent times become available worldwide to end users - and use is now more widespread either through alternative preperations of the traditional beverage (usually involving additional flavourings such as sugar or coconut milk) or taking a powdered form of the substance in capsules. This has led to regulation in some countries such as the United Kingdom and Switzerland.

Dried Kava root contains approximately 3-20% kavalactones, depending on the strain. Doses are given for kavalactone.

Note: Onset is faster with an increased dose.

Research has suggested that kavalactones potentiate GABAA activity, but do not alter levels of dopamineA neurotransmitter associated with movement, attention, learning, and the brain’s pleasure and reward system. and serotoninA monoamine neurotransmitter, biochemically derived from tryptophan, that is primarily found in the gastrointestinal (GI) tract, platelets, and central nervous system (CNS) of humans and animals. It is a well-known contributor to feelings of well-being. in the CNSCentral Nervous System. It is thought to do this via modulating GABAGamma aminobutyric acid an amino acid that is found in the central nervous system; acts as an inhibitory neurotransmitter. activity via altering the lipid membrane structure and sodium channel function.

Heavy, long-term kava use does not cause any reduction of ability in saccade and cognitive tests, but is associated with elevated liver enzymes.

Desmethoxyyangonin, one of the six major kavalactones, is a reversible MAOMonoamine Oxidase, an enzyme that catalyses the metabolism of many drugs (e.g., DMT, dopamine and serotonin).-B inhibitor (Ki 280 nM) and is able to increase dopamineA neurotransmitter associated with movement, attention, learning, and the brain’s pleasure and reward system. levels in the nucleus accumbens. This finding might correspond to the slightly euphoric action of kava.

Kavain, in both enantiomeric forms, inhibits the reuptake of norepinephrine at the transporter (NAT), but not of serotoninA monoamine neurotransmitter, biochemically derived from tryptophan, that is primarily found in the gastrointestinal (GI) tract, platelets, and central nervous system (CNS) of humans and animals. It is a well-known contributor to feelings of well-being. (SERT). An elevated extracellular norepinephrine level in the brain may account for the reported enhancement of attention and focus.

Yangonin, another major kavalactone, has been demonstrated to act as a CB1 agonistA substance that initiates a physiological response when combined with a receptor.. This mechanism is also responsible for the effects of THCTetrahydrocannabinol and likely contributes to the psychoactive effects of kava.

For a breakdown of the legal status of Kava click here.